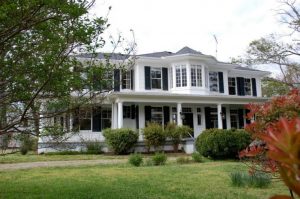 Pinifer Park is not occupied, but it is owned by Pinifer Park Properties of Chesterfield, which has subdivided the roughly 26-acre parcel into 15 lots for development of a subdivision that will be called Pinifer Park.

Designers from around the region compete for space and then the designers that are chosen design their designated spaces to get the house ready for tours.

“When the designers bid on spaces and they’re selected, everything is their cost – from the paint to the carpet to the furniture,” Spangler said. “And the benefit to them is over 10,000 [people] touring through their space.”

Pinifer Park will be open for tours from Sept. 10 through Oct. 8.

Kroger is the event’s major sponsor and tickets can be purchased in advance at all Kroger locations for $15 through Sept. 9. After Sept. 9, tickets can only be purchased at the door for $20 per person.

“We have a big kickoff gala the Friday night before the house opens, which is Sept. 7,” Spangler said. “And tickets for that in advance are $125 and you can go to our website – RSOL.org – and get all the information about all of the events and prices and where you can buy tickets.”

The designer house will be open Monday through Sunday at various times, which also can be found by going to RSOL.org, Spangler said.

Discounted group sales are available for groups of 10 or more people, she added.

“This is the major fundraiser for the Richmond Symphony Orchestra League,” Spangler said. “As I said, it’s every other year. We always have a minimum of 10,000 people tour the house. On a good year it could be well over 13,000. We’re hoping to break all kinds of records with this house because it’s approachable, there’s no parking issue, and sometimes in years past we’ve had to shuttle people because of the location.”

All proceeds from the designer house events go to the Richmond Symphony, Spangler said.

“We’re one of a very few symphonies in the country that operate in the black,” Spangler said. “A lot of the money that we raise goes to education. We have projects with at-risk children where we help them become acquainted with music.”

Something different with this year’s designer house will be “Thirsty Thursdays,” which will begin on Sept. 13 and continue for the following three Thursdays from 5:30 to 7:30 p.m. It will feature live music and wine and cheese with a different Virginia winery represented each Thursday at a cost of $20 per person, which also includes a $5 discount off the purchase price of a ticket to tour the house.

Miss Virginia 2013 will be the guest of honor at the Sept. 13, event, Spangler said.

The designer house also will feature a café and a boutique that will be open daily, Spangler said, adding that the boutique vendors donate a percentage of their sales to the Richmond Symphony Orchestra League.

Faye Holland of Midlothian is the chairman of this year’s designer house project.

“I’ve been involved with the designer house for 24 years,” Holland said, noting that Pinifer Park is the 15th designer house and this is the 30th year for the project.

“I think that it’s in a very unique location,” Holland said. “It’s a beautiful house – 1910 Queen Anne home in a gorgeous setting on 26 acres.”

When the house is ready for tours, Holland said the public can “really come in and see what the designers have done, what a beautiful job they’ve done.”

Pinifer Park was originally built as a summer home for the Edwin C. Laird family, who lived in Richmond on Park Avenue.

“On top of the house there’s a widow’s walk, which will not be open for the touring due to insurance issues,” Spangler said. “But on a very clear day from the widow’s walk in the winter time with no foliage, you can see the James River and you can see all the way to the Blue Ridge Mountains and that was one of Mr. Laird’s favorite places to be.”

An avid hunter, when Laird had Pinifer Park built, Spangler said “he wanted it done in the style of some of these great hunting lodges of the North. Thus, when you enter, you definitely get the feel of a hunting lodge with the darker wood and the big fireplace. So it was very much customized to his personal tastes and hobbies.”

After the designer house project is over, the house called Pinifer Park will be for sale and will serve as architectural “inspiration” for the remainder of the subdivision, Goddard said.

Goddard said he was pleased to be able to partner with the Richmond Symphony Orchestra League for this year’s designer house.

“Well, it’s a great opportunity,” Goddard said. “It’s a win-win for the symphony house. It’s a win-win for us in terms of being able to piggyback on top of the designers and the renovations they’re doing and we can use that to bring a lot of the areas of the house that need to be brought up to speed in order to offer it to the market. And secondly, symphony house attracts [thousands of] people through my little subdivision here and makes a lot of people aware of what we’re trying to do and those people go tell other people and those people tell other people.”