Pinifer Park: A former country retreat is getting transformed into an upscale Midlothian community 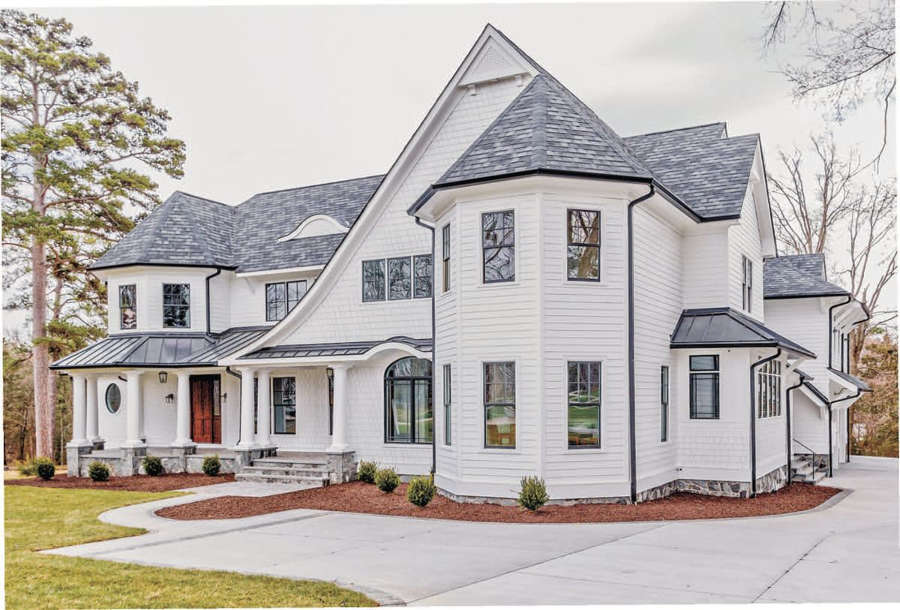 Developer and homebuilder Warren “Dutch” Goddard has sized up a lot of land in the course of a career that spans 33 years. Typically, the parcels are heavily wooded, and it can be hard to visualize what the land would look like as a developed community.

The 25-acre parcel of land that would become the Pinifer Park development in Chesterfield County’s Old Gun Road corridor was different.

It had once been part of a significantly larger farm called Pinifer for its large number of loblolly pines, and the manor house that had been built in 1910 still stood in the middle of a landscaped lawn and rolling pastures. As Goddard walked through the parcel in 2010, it looked essentially the same as it had for the last century, and with all the open spaces, he found it easy to visualize what the development could look like.

“It was like building a community in a park,” Goddard said. “I could see exactly what it would look like – where the roads would go and where the lots would go. I hadn’t had that experience before. I got excited that this could be a special place in Midlothian.”

The property, which once covered more than 250 acres, had a long history. The Laird family bought it in 1910 and built the 4,700-square-foot manor house, located near the intersection of Robious Crossing Drive and Robys Way, that same year, as a summer retreat. The senior Laird moved his family to the property in 1912, though, and he commuted daily via train back to his office in Richmond. Descendants of the Laird family owned the property for most of the 20th century. They sold the remaining 25-acre parcel, with the manor house, in 1995 to a third party, and Goddard bought it from him in 2010.

Soon, Goddard began working on plans to turn the site into an upscale community with 15 home sites ranging from 1 to 6 acres. He built roads in the subdivision in 2011, but the economic downturn and housing crisis that had begun a few years before slowed down Goddard’s plans. “While we waited for a recovery, we offered the manor house to the Richmond Symphony as the 2012 Designer House,” Goddard said. “This provided an opportunity to renovate two bathrooms, construct a new kitchen with an attached family space and construct a two-car garage.”

Goddard also moved a farm-dependency building – including its chimney – to a new foundation behind the manor house. He converted the building, which had been built in 1880, into a charming guest house, and it sold with the manor house shortly after the Designer House event ended.

More than 8,000 people attended the event, and news about the new development spread. Goddard began custom-building homes in the development later that year. So far, he has completed nine homes. (He’s Pinifer Park’s sole builder.)

“Sales have moved reasonably well, with an average of two to three houses per year,” Goddard said. “As the builder and developer, it gives me aesthetic and quality control over the community, and it shows in the finished homes.”

Goddard has turned to the manor house’s Queen Anne and Colonial Revival styles as well as the Revival styles of the 1920s and 1930s as inspirations for the new homes in Pinifer Park. Home sizes range from 4,000 to 7,500 square feet.

Five lots remain on the market, and the prices for finished houses will depend on the size of the lot and the complexity of the home’s design.

“For budgeting purposes, we tell people the lot price is $275,000 for an acre lot and construction costs are around $195 per square foot,” Goddard said. “We have an excellent design-build program that allows clients to make informed decisions about their custom homes without having to purchase a lot or pay for a full set of architectural drawings in advance.”

The development’s location and exclusive setting are helping to drive sales, Goddard said. Shopping, dining, entertainment and schools are less than a 10-minute drive away.

Many of Pinifer Park’s homebuyers have young families, and they were looking to move to larger homes in the Midlothian area as their families grew and their careers got established, Goddard said.

In fact, many of the buyers are relocating from homes no more than two miles away.

“They started a family and bought their first house in Midlothian, and now they were looking to move up while staying in the area,” Goddard said. “Custom-building in Pinifer Park offers an opportunity to do that.”