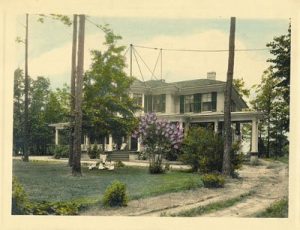 When Edwin and Meade Laird moved permanently into their Midlothian home, Pinifer Park, there was still some work to do. After all, the Queen Anne-style house was the Lairds’ second home, a summer getaway.

They took up residence there in 1912, two years after the home was built, but they would need a heating furnace and insulation installed to make it through the colder months. Edwin and Meade were building a family and transitioning from an urban lifestyle — staying the majority of the year in a rented Park Avenue home in Richmond — to more sedate surroundings.The century-long history of Pinifer Park (pronounced PINE-uh-fer) is one of the highlights of this year’s Richmond Symphony Orchestra League (RSOL) Designer House, a fundraising effort that’s organized every other year.

Pinifer Park was originally built in 1910, and it includes a central interior modeled after a New England hunting lodge. There are fireplaces in every room except the maid’s, which was above the kitchen. Pinifer was so named because of the once-abundant pine trees on the property. The paneling throughout the house is from those trees.

During Pinifer Park’s first two years, the family spent winters in their Park Avenue home and later in various homes on Monument Avenue because their children were attending local schools. The Lairds had one son, Edwin, known as “Buddy.” Daughter Meadie was five years younger, and twins Burwell and Nancy came along seven years after their big sister.

Burwell’s daughter, Mary Roach, once lived in the house and has recorded her family’s memories in a brief chronicle of Pinifer Park. In it, she notes that her grandfather took a train to Richmond each day with two other neighbors. Laird was president of the E.C. Laird Corp., which sold Laird brand coffee and baking powder.

“The men caught the train at a grade crossing near the house, which used to be called ‘Reed’s Crossing,’ ” Roach says. “The train stopped just to pick them up.”

The Pinifer Park house was simply furnished. “Most of the furniture was wicker, and the beds were iron beds, typical of summer homes of that era, except grandfather’s and grandmother’s room, which was beautifully furnished with light-colored wood furniture,” says Roach. “No iron beds for them!”

The home was also a pioneer in modern technology. In 1912, it became the first house beyond Bon Air to have telephone service. The Lairds let William T. Reed (who married Meade’s sister, Alice Burwell Reed) and another neighbor use the line as well.

The first electricity line to the house came in 1921. At first, only the kitchen and dining room were wired, so that the family could have light when eating and an electric refrigerator. Previously, 400 pounds of ice were brought by train every day from the Richmond Ice Company and stored in the “cold porch.” The rest of the house was wired by 1925.

Edwin died just a year later, in 1926. He had a heart attack or stroke while driving; his car stalled on the streetcar tracks and was hit. Meade continued to live at Pinifer Park with the children. Around 1960, she had a stroke and needed full-time nursing care. Meadie moved back to Pinifer Park to oversee her mother’s care until Meade’s death in 1962. In the late 1960s, the property was divided among the siblings.

Burwell kept the house and approximately 12 acres. The others sold the remaining property, and it became the Queens Park subdivision.

Roach lived in the house as a teenager. “At the time I lived there, it was pretty isolated,” she said in a phone interview. “I would drive into St. Catherine’s to go to school every day and continued to live there through college breaks from Sweet Briar. I mostly remember the small things like cracking a rock open to look at the colors and taking long nature walks.”

She and her siblings inherited the house and property after their father died in 1995 (their mother, Burwell, died in 1989). They eventually sold the house to Debbie and Freeman Thompson, who, in 2010, sold it to developer and builder Warren “Dutch” Goddard.

Goddard had admired Pinifer Park and an adjoining property for years, waiting for a chance to make an offer. In 2005, he tried to buy the adjacent acreage but couldn’t come to terms with the owner. When the property went on the market again in 2008, it included the Pinifer Park farmhouse and 25 acres. “I walked the property, and it just had a great feel,” Goddard said. “It sits high on one of Midlothian’s hills and takes advantage of the pasturelands.”

The deal was finalized, and Goddard began developing the property, with roads built throughout the subdivision in 2011. It was not a great time for the home-building market, however.

Fast-forward to the present, when the house will be more elaborately furnished by some of the best-known decorators in the area. Goddard is banking on the biennial RSOL Designer House traffic to draw attention to the renovated and decorated spaces in the Pinifer Park house, as well as the upscale community surrounding it, which now includes 15 home sites of 1 to 6 acres.

“There are mature trees and shrubs,” he says, “so you feel like you are out in the country.”

The Pinifer Park Richmond Symphony Orchestra League Designer House at 3200 Old Gun Road features 4,700 square feet, five bedrooms and four baths on an almost 13-acre lot. It officially opens to the public with a Gala Preview Party on Sept. 7. The house is then open for daily tours from Sept. 10 to Oct. 8. Advance tickets for the house tour will be available for $15 beginning Aug. 1 at all Kroger locations.  After Sept. 9, tickets will be available at the door only, for $20.